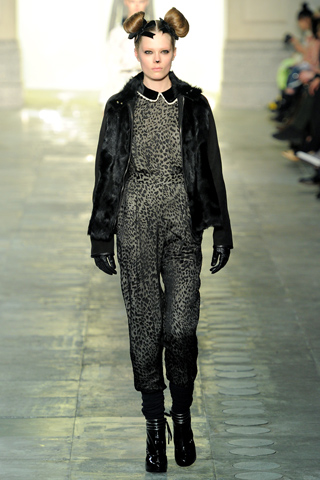 The Topshop Unique Fall/Winter 2011 Ready-to-Wear collection was shown on February 20th at London Fashion Week. Though lots of models throughout fashion weeks in New York and Europe walked the runway robed in animal prints, Topshop designers took a unique spin to the trend and splattered dalmatian spots all over some of their garments. Models were even styled to look like cute, yet chic, pouting puppies!

This jumpsuit was featured in the collection, and could almost pass as a cheetah-printed piece. The steel-grey colour gives it edge, the baggy pants – high waist combo gives it an air of punk glamour, and the monochrome collar adds a school-girl touch. Black boots, gloves and a jacket complement the outfit perfectly.

Rihanna in Jean Paul Gaultier at the 2011 Grammy Awards

Rihanna wore this white Jean Paul Gaultier dress to the 2011 Grammy Awards. Though some thought the outfit was a hit and some disregarded it as a miss, there was a general consensus that it was a unique but crazy one-off look. Then, at NYFW, designer Norma Kamali displayed a dress with a similar, but not so blatant concept: 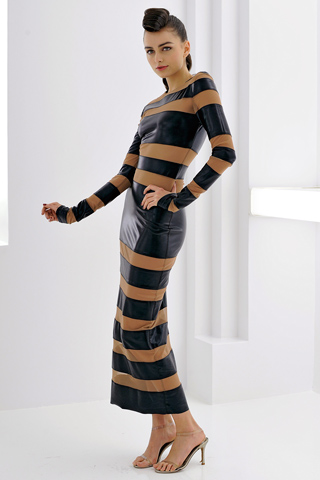 But then came fashion weeks in  Europe, and the see-through stripes style dress was seen again on the runway…and again…and again… until it could no longer be dismissed as a one-time risk taken by Rihanna. 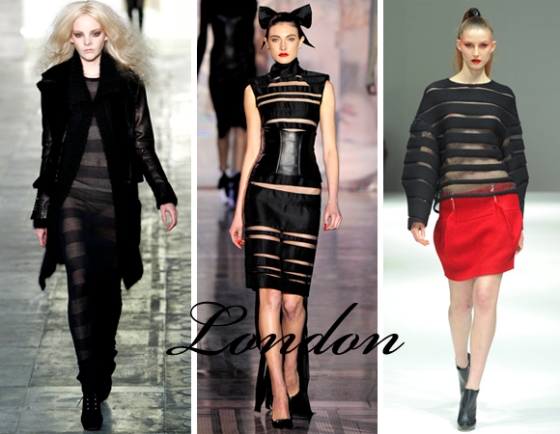 In Paris, Pedro Lourenco used black fur while Vionnet displayed the look in a baby blue colour, and Norma Kamalli showcased a more casual and conservative take on the style in New York.  Commuun opted for a monochrome style of the dress, and Emanuel Ungaro went metallic and flashy with his design.

It looks like what appeared to be an avant-garde red carpet look at first, may come to be a bona fide trend this Fall season!

With Fashion Weeks in Europe drawing to a close, a few colour trends stood out amongst the various collections. The Crayola shade of red-orange for instance, was used by designers in New York, London, Milan and Paris. 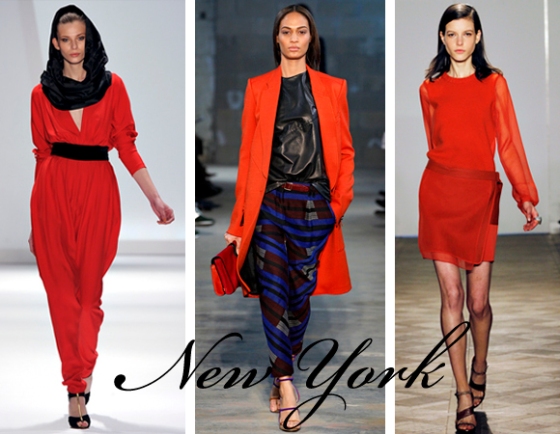 Carlos Miele’s gathered jumpsuit will be a popular garment this fall season. Many neutral-coloured oversized blazers were spotted on the runways, but this Proenza Schueler piece is funky and eye-catching. And although black sheer dresses were a plenty amongst the New York collections, these sheer red-orange sleeves by Reed Krakoff give a fresh and cheery look to the trend.

Matthew Williamson shows that red-orange pants can be edgy, and Issa gave grace and sophistication to this bright dress from his collection. Though Feretti’s outfit could have looked like a prison jumpsuit, the model carries it with a whimsical attitude.

Designers in Milan showed that red-orange outerwear will definitely be trendy this Fall, and Blumarine used cut-out lace in the same colour for a spin-off of the sheer lace dress. 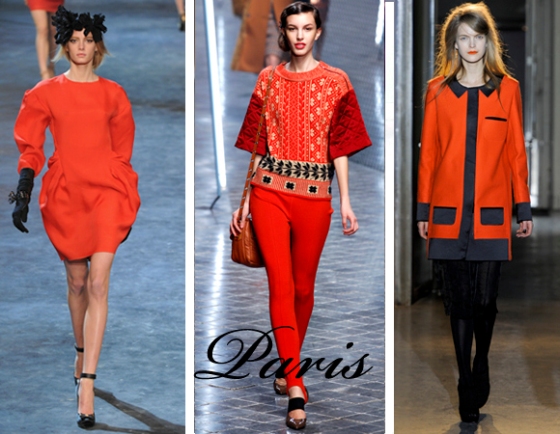 Central Saint Martins College of Art and Design is a cutting edge school based in London, England. Each February, the creme de la creme of the fashion program’s graduating class show off their work at Fashion Week and last month, the class of 2011 sent a collection comprised of 204 looks down the runway at London Fashion Week.

Designer Viktor Smedinge graduated from Central Saint Martins in 2009 with a BA, and he returned for his MA. His ten runway looks appeared to be inspired by the aces and spades in a deck of cards, and his colour palette consisted only of black and cream. This jumpsuit illustrates his creativity and tailoring expertise. The scroll-like folds of fabrics growing out of the suit’s hips and the sleeves resembling a football player’s padding however, almost take the garment from artistic to avante-garde…much like an outfit that aspires to be Gaga, but isn’t quite over-the-top enough.

Click here to browse through some of the creative looks put together by the fashion students. 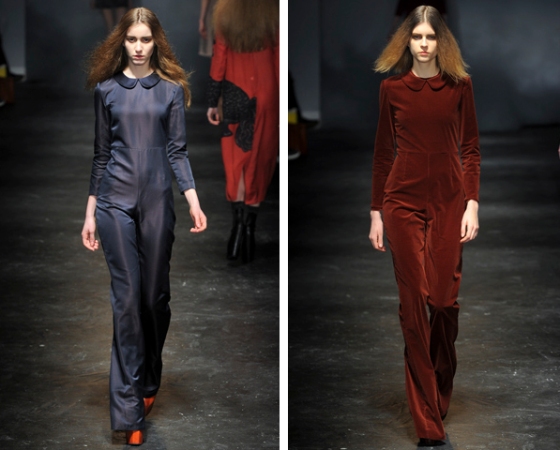 Charles Anastase showed the world his Fall/Winter 2011 Ready-to-Wear collection at London Fashion Week on Saturday. A variety of colours and textures were sent down the runway, so diverse that it was hard to pinpoint a single look or theme; but at best, it could be described as schoolgirl meets Lolita meets country-girl couture.

These two jumpsuits from his runway show share the same cut:  flared bell-bottom pants, long, fitted sleeves and peter pan collars. The first gives off a futuristic vibe. It appears to be made from crepe or silk, and the dull but shiny blue colour allows one to classify it as evening-wear. The burnt red corduroy piece has more of a country (maybe just because the colour is reminiscent of a typical barn!) look,  however seems more wearable as day-wear… but with the right accessories it too can be worn at night.