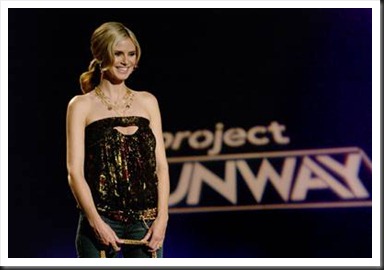 While Heidi Klum is a world-famous supermodel and fashion icon, many simply know her as the host of Project Runway. The show (one of my favourite!) gives small-time designers a chance to make it big. They are presented with various challenges (like to design a couture dress from a potato sack, or create a dress from items found in a grocery store) and face elimination if their designs are not up to par. The show’s judges include Nina Garcia of Marie Claire Magazine, and designer Michael Kors. Tim Gunn helps the competitors along their journeys throughout the show.

Earlier this month, a new spin-off of the show was announced—Project Accessory, which will air on Lifetime Television. Open calls for accessory designers will be held next month in Los Angeles, New York, Chicago and Miami

Watching designers produce hats, belts, bags and shoes will be just as entertaining to watch, especially with the show’s wacky challenges and competitive environment.

Click here for more details about the open calls, or check out the casting call posted on the official Project Runway blog!